New Products - All Aboard Metro City Next Stop

All Aboard!!! Next Stop Metro City!

Trains are iconic in so many cities in the US. In New York they have the subway, London, the tube and Chicago the L. Trans are part of life in the city. Lets make them part of your tabletop. 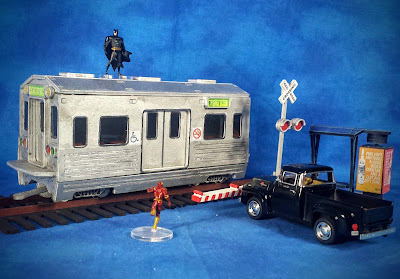 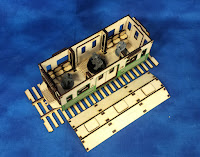 The Metro Electric Train set is the latest addition to the Metro City modern kit. The kit is modeled after the train used by t he Chicago Transit System. Each train car is designed to fit either Burn In Designs own track system or Lionel O gauge 3 rail tracks allowing for easy expansion and track options. Cars have a removable top, seats and movable doors allowing the game to be extended inside the cars. (HWD 3.75"x2.75"x9")
Metro Electric Train    MTC-TC01 $28 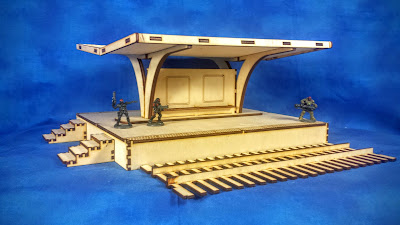 Elevated for easier entry and exit from the train cars the train stop allows you to present a seamless picture when setting your table. The train stop is 2 sided allowing you to lay tracks on either side. The central awning includes benches on both sides and even is marked for the "warning strips" at the edges of the platform near the tracks. (HWD 5"x11"x10")
Metro City Train Stop   MTC-TS01 $35 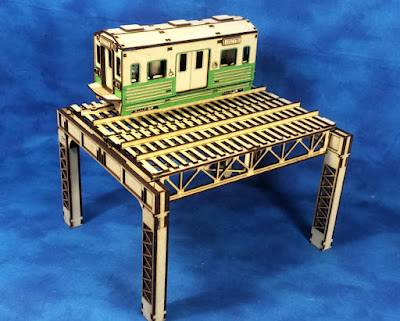 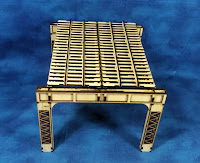 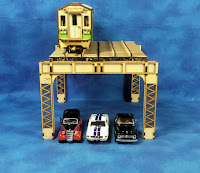 The Trellis is designed to allow trains and cars to better share the load without battling each other for space. Designed to large enough to either cross or run over the top of an existing road like those found in city tile systems like Secret Weapon Miniatures Urban Streets set.  The sets are designed to link together to build longer sections. (HWD 7"x10"x11")
Metro City Trellis, includes 2 tracks , trellis and 2 stands  MCT-TT01 $35
Metro City "O gauge" train tracks, 5 - 11" sections   MCT-TT40 $25
Metro City "O gauge" train track curve, 2 sections makes a 25" half circle  MCT-TT45 $25

To order a set email us at BURNINDESIGNS@GMAIL.COM or to find out more and stay on top of our new releases please  "like" us on Facebook at www.facebook.com/BurnInDesigns and follow us on Twitter @BurnInDesigns
Posted by Diehard2501 at 4:04 PM