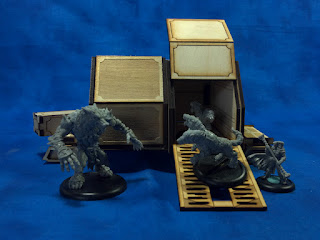 When I released the first heroic scale shipping container I got questions form people asking for something that would fit in a wider variety of gaming galaxies. The look and games that were mostly mentioned were Warmachine/Hordes and Steampunk/Space 1889. With those marching orders I started doing some research and came up with my take on the a one that would fit in those worlds. 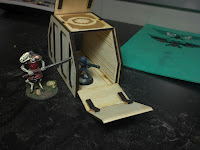 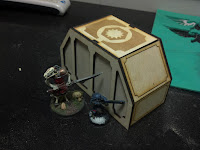 First the shape and size. I wanted something that was tall enough to hide larger models behind without dominating the battlefield. After all this is not a model that will sit alone but will likely be used in groups of 2 or 3. Next I wanted to avoid the standard rectangle modern boxcar container. These are already available from several manufacturers so why reinvent the wheel if you really can't improve on it. This gave me an idea to follow the sloped lines of the other container and use the sides a doors. Now I could group the containers and still have access to the contents. They can also be easily stacked to add some much needed vertical space to the table. 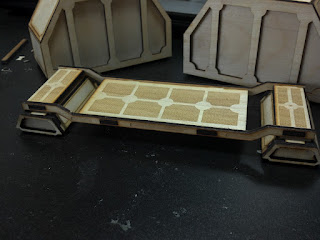 With that done I needed a way to move them around and what better way than by rail. The carrier again needed to pull double duty so it was sized to carry the boxes inline as a single or in pairs, side by side. For wheels I kept things simple with train style boxed wheels in pairs.

This kit is almost ready just need to add a few more details. Stay tuned for the final version.
Posted by Diehard2501 at 4:32 PM